The Simple Wardrobe, Part 1 - A Sort-of-Tutorial 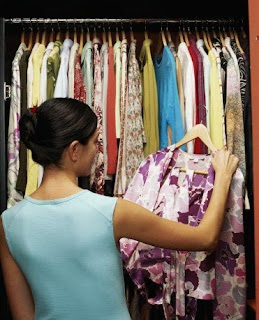 I'm not really the go-to person when it comes to a simple wardrobe.

At least, not right now.

It's not that I don't know how, it's just that since we moved back to the US a year ago, my wardrobe has exploded.  I guess there are a few reasons for that, the main one being that, while I'm of an average size as far as an American woman is concerned, I was on the extra large side of huge in Korea.

When I was finally able to find jeans that fit my waist, they didn't fit my hips.

And if I was able to find T-shirts, they were so short that half of my torso was left bare.

And just forget about undergarments..  just forget.  I sure wish I could.  :P

Anyway, with all of that being the case, I wasn't able to purchase new clothes for no less than a year and a half.  So, when we got back home, picking out something new to wear was at the top of my list.  In hindsight, however, it may have gotten a little out of control.

First, I didn't plan very well when we moved, bringing with me a somewhat cheap wardrobe with lots of pieces that didn't work well together, and then.... there was the case of the CHAOS washing machine.

Lest I be thought of as a dreadful, ungrateful person, I need to say right here that it was really great to have a washing machine.  Both the Mister and I were so, so happy to be able to wash our clothes right there in our apartment.  Or.. out on the porch.  But you take what you can get, right?

There was a problem with the CHAOS, however (yes, it was named CHAOS).

Actually, there were a few problems.

First, we had to stop and google it because it can be a little difficult to work with a washing machine that's all in Korean and looks totally different than any household appliance you've ever seen before.   Then, we had to call in reinforcements because we could figure out how to turn it on, but from there it was like a hurricane in a box and we needed to know how to make it work not just shoot water around.  Then, we had to buy a new hose so that the water could drain all over the porch and into the floor drain, instead of... I'm actually not sure why we bought the new hose, since it was already doing that.

ANYWAY, all of this is terribly beside the point, isn't it?  Because the point is, that while the CHAOS was grand to have and we were grateful... and while the CHAOS did utilize chaos theory in it's agitation of our clothing.... and while we did finally learn how to turn it on and it did wash our clothes, albeit somewhat harshly...

Well, in short, it wrecked every last piece of clothing I owned.

Thankfully, my sister came to visit and brought some provisions that got me through the next 3 months.

Then, finally-finally, I was able to buy a sewing machine.  And from there, I made three jumpers out of the softest, most lovely Korean fabric that I wish I could find here in America but I doubt I ever will...  My three jumpers.  I still wear them when the clean laundry's running thin.

And, if you're wondering, yes.  I did wear those things for 9 months straight.  Just 3 jumpers, bolstered by long sleeves and leggings in the coldest cold of winter, and lots of handknit wool socks.  They served me very well and, honestly, I think that although my wardrobe at that point was the sparest it has ever been, I was also the happiest I have ever been as far as my clothes are concerned.

All of that to say... I am hoping to return to that idea.  A small wardrobe of pieces I can wear pretty much every day.  Only maybe not so extreme as to literally have only 3 jumpers.

Because of where I am right now with my own clothing situation, I don't intend for this to be a tutorial on how to simplify your wardrobe.  I'm not "there" enough yet to dole out that kind of awesome since I'm still in the process of figuring out for myself what works and what doesn't.  I'm just going to let you know what I'm doing, my process, what's working/not working for me and I'll give you some ideas for things to think about along the way.  Okay, this might be a sort-of-tutorial, but please don't take what I say as the gospel truth!  Wardrobes are so individual and everyone has to figure out what works for them individually.

In this spirit, I spent some time between classes today, outlining what a simple wardrobe might look like for me.  I tried to think of what I wanted from my clothing, the demands my life makes on my wardrobe, the sorts of activities I take part in, etc... and I started making some lists.  Those are a few of the things I want to share with you on Monday.


I'm really excited about it so drop back in to catch up with me!

Email ThisBlogThis!Share to TwitterShare to FacebookShare to Pinterest
Labels: Stories from Korea, The Simple Life, The Simple Wardrobe

catie
Idaho, United States
I am a 20-something (emphasis on the something) wife to the Mister, knitter/sewist/crafting extraordinaire (?!), who is, bit by bit, whitting down our possessions to a much more manageable amount. It has already helped us both feel saner, kept our home much cleaner, and made my whole life so. much. simpler. Follow along on our lovely blog-a-lot and start your own delightfully simple life! It's not so hard, I promise.

the best loved posts of all time